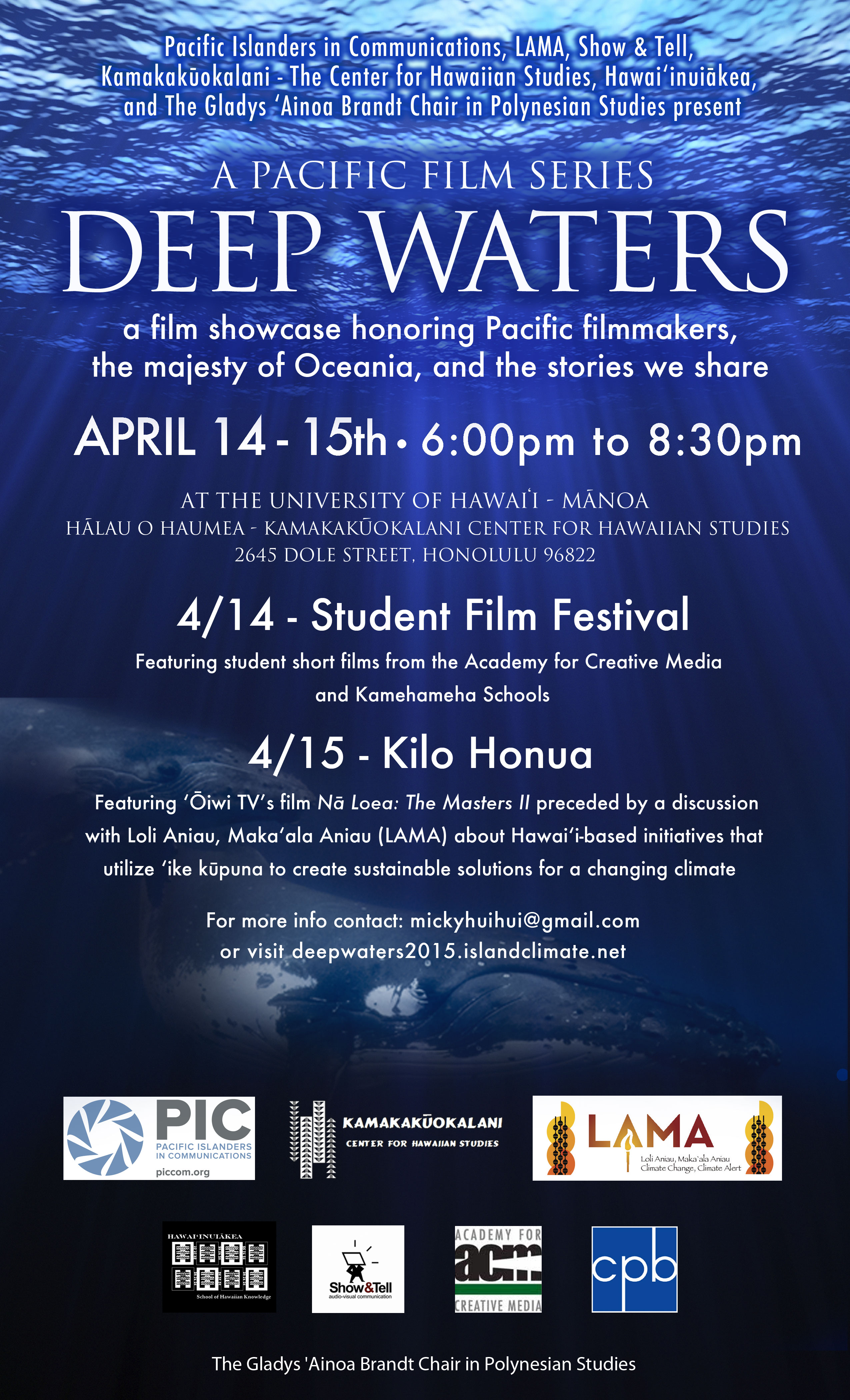 DEEP WATERS 2015 is a two-day Pacific Film Series honoring Pacific media, the majesty of Oceania, and the stories we share.

Fans of Nā Loea: The Masters (featured in Pacific Heartbeat Season 3) will enjoy this second installment of stories that beautifully depict the lives of those who are considered masters in Hawaiian culture. Mac Poepoe is a Native Hawaiian fisherman and a community leader on Moloka`i who has dedicated his life ensuring that the ocean, or “icebox,” will be well-stocked for generations to come.  Herbert Hoe recognized how the widespread health afflictions of the Native Hawaiian people impaired their ability to care for themselves, and created his `Ai Pono diet program utilizing the traditional foods of ancient Hawaiians.

Tuesday, April 14th is the much-anticipated Student Filmmakers night, including short films by students from Kamehameha Schools and the Academy for Creative Media at UH Mānoa.

The evening of Wednesday, April 15th will examine concepts of sustainability in both our island resources, as told by authentic Pacific voices.  LAMA will host and share aspects of Kilo Honua, a community resource designed to equip our island communities with the vocabulary and knowledge to engage in productive discussion, inform decision-making, and to formulate solutions in renewable energy, food security, traditional knowledge, and climate change.  "Native Hawaiians like other indigenous peoples around the world have survived for millennia by following and living by the ʻike kupuna (ancestral knowledge) passed on from one generation to another.  Kilo Honua (earth observers) is not just a community resource but hopefully an awareness raising and inspirational tool to become kilo (observers) like our kupuna so that we are better prepared for the impacts of climate change, which are already evident here in our islands,” said Malia Nobrega-Olivera, Hawaiʻinuiākea School of Hawaiian Knowledge Director of Strategic Partnerships and Community Engagement.

The featured film on April 15th is Nā Loea: The Masters II, a film that showcases two well-respected kilo in our community. Both stories are testament to ʻike kupūna (ancestral knowledge) and the resilience of kānaka maoli in these modern times.

Pacific Islanders in Communications (PIC) is presenting this film ahead of its national PBS broadcast in May. The film is part of Pacific Heartbeat, PIC’s anthology series now in its fourth season. The series provides viewers a glimpse of the real Pacific—its people, cultures, languages, music, and contemporary issues.

“The collaboration between PIC and the University of Hawaiʻi has provided a venue to celebrate engaging films and documentaries created for the community at large to gain a deeper understanding of Pacific history, language, and culture,” said Leanne Ferrer, PIC’s Executive Director. “We’re so excited to be celebrating the fifth year of Deep Waters along with our amazing partners.”

Loli Aniau, Maka‘ala Aniau (Climate Change, Climate Alert) or “LAMA” is a program housed within Hawaiʻinuiākea School of Hawaiian Language, one of the largest schools of indigenous knowledge in the United States at the University of Hawaiʻi at Mānoa.  LAMA’s mission is to catalyze climate adaptation and resiliency by engaging communities in Hawai’i and beyond through innovative training and policy tools that link decision- makers with the university, island communities, and the public as well as private sectors.  It is our goal to engage and empower climate justice communities in

About Academy for Creative Media

The Academy for Creative Media, part of the University of Hawai‘i at Mānoa’s College of Arts and Humanities, emphasizes narrative, or story telling, theories, skills and application across multiple platforms of digital media and within a context of cultural and aesthetic values. ACM seeks to empower students to tell their own stories of Hawaii, the Pacific and Asia rather than have those stories told for them through a different cultural lens that is distant and often distorted. ACM offers a core curriculum in three tracks: Digital Cinema, Computer Animation, and Critical Studies.

About Kamakakūokalani Center for Hawaiian Studies

Kamakakūokalani, meaning upright eye of heaven, serves as a metaphor for the Hawaiian Studies program’s higher mission of seeking truth and knowledge. Kamakakūokalani, its faculty, classes, and program, represents Hawaiian perspectives and knowledge within the larger academy. Thus, most courses are distinctive and taught nowhere else in the world as originality is a hallmark of the curriculum. Kamakakūokalani offers bachelors and masters of art degrees in five areas of concentration. The M.A. and B.A. programs have the same 5 areas of concentration so students can seamlessly move from one program to the other.

About Pacific Islanders in Communications

Established in Honolulu in 1991 as a national non-profit media arts organization, PIC is a member of the National Minority Consortia (NMC), which collectively addresses the need for programming that reflects America's growing ethnic and cultural diversity. Other NMC members serve the Asian American, Latino, black, and Native American populations. Over the past years, NMC members have provided hundreds of hours of culturally-diverse programs to PBS. Primary funding for PIC and the NMC is provided through an annual grant from the Corporation for Public Broadcasting (CPB). The mission of Pacific Islanders in Communications (PIC) is to support, advance, and develop Pacific Island media content and talent that results in a deeper understanding of Pacific Island history, culture, and contemporary challenges.  In keeping with the mission, PIC helps Pacific Islander stories reach national audiences through funding support for productions, training and education, broadcast services, and community outreach.