PIC-funded producer Nathan Fitch leads us through his incredible journey documenting the lives of Micronesian soldiers, traveling from the Federated States of Micronesia, to the United States, and ultimately to Afghanistan. Nathan is also a gifted photographer, and he graciously shared some of the unforgettable photos he's taken during the R&D phase of his project.

I’ve always loved storytelling. The first manifestation of this interest that I can remember occurred during my first weeks in preschool. While all my cohorts boisterously clamored for recess, I recall yearning for story time, and the chance to lose myself in far away places and adventures. Over the years, this interest in storytelling has changed and grown, influenced by formative life experiences, including the two years that I spent in the Peace Corps doing historic preservation work in the Federated States of Micronesia. It was during that time that the seed of the idea for my documentary film, Island Soldier, which has received R&D funding from Pacific Islanders in Communications' Media Fund, first began to germinate.

Over the course of my time working in the community of the islands, I saw firsthand the impacts that were occurring, as many young men and women made the decision to enlist into the United States military. As with any good story, the topic of this impact of militarization upon a tiny island nation stoked the embers of my imagination, and raised many new questions in my mind. I began filming for Island Soldier in January 2012, concurrently following a number of Micronesians serving in the United States Army.

Among the Micronesian communities that I visited was one in Colorado on the Fort Carson Military base. While on the base I met with Florian Nena from the island of Kosrae, who informed me of the impending deployment of his unit to Afghanistan. After securing permission to film on Fort Carson with the 62 Engineers company (in which Nena and several other Micronesians are stationed), I determined that I would like to document the deployment and duties of the soldiers in person.

The process of applying for an embed with the United States Military was a lengthy one for me, which started in February 2013. On the advice of Cal Skaggs (director of Kansas to Kandahar: Citizen Soldiers At War), I scheduled a meeting with the Media Relations ofﬁce on the Army base in Fort Carson, Colorado. For the meeting I brought a copy of my synopsis, a treatment, and a laptop with a clip of the project. Although it was short, the meeting went well, and shortly afterwards I applied for and was granted a Production Association Agreement (PAA) with the US Military.

After securing the PAA, which is vital in being allowed access to ﬁlm on military bases, and provides a blanket release over all US soldiers in uniform, I had to apply for my embed from the International Security Assistance Force (ISAF) in Kabul, Afghanistan. For this application, I was required to have a valid passport, press pass, proof of insurance, letter of intent to publish, and a number of other required documents. Luckily, I was supported in my request with letters of support form PIC and the Micronesian Seminar. From the time I submitted all the ﬁnal paperwork, it took about a month until the embed request was ﬁnally approved on August 15th.

My embed was to start on August 25th, so that left a week before I needed to depart New York to be in Afghanistan on time. For the next seven days I spent all my time reading blogs and websites, emailing experienced war ﬁlmmakers/photographers, and trying to ensure that I would have everything that I needed to be able to work in a war zone. Vaccinations, body armor, insurance, extra batteries; the list seemed to go on and on, and I was literally packing the last bag when the car pulled up in front of my apartment in Brooklyn to take me to the airport. After forty hours of travel, I ﬁnally landed in Kabul on August 25th. After a brief sojourn on the ISAF base in Kabul, I was ﬂown on a military cargo plane to Kandahar, from whence I was to go to Forward Operating Base (FOB) Pasab for my embed with the 62 Engineers. 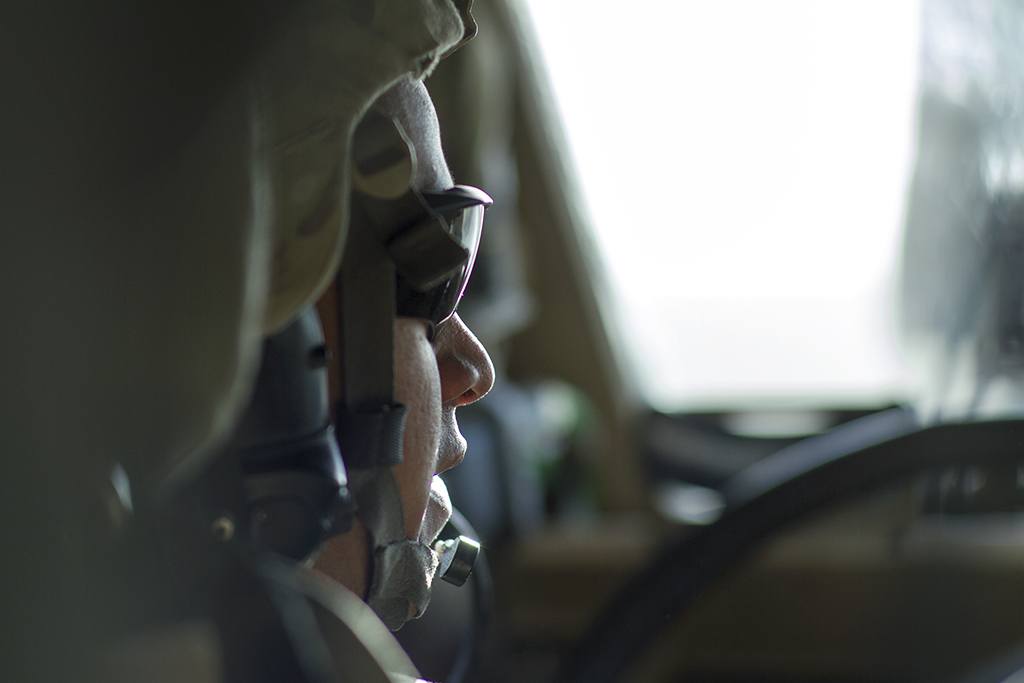 En route to FOB Pasab in a military helicopter, complete with armed gunner at the ready, I was confronted by a landscape of profound beauty and harshness. I tried to keep my cameras steady (GoPro 3 and Canon 7D) as we ﬂew over a jagged mountain range and out into an arid stretch of desert where the base was located. In contrast to the intense greenery of the islands in Micronesia, the dominant hues here tended toward the browns of baked earth and drifting dust. Once we had landed on FOB Pasab, I was collected by a member of the 62 Engineers, whom I had last seen boarding a plane ﬁve months earlier in Colorado. The ﬁrst morning, I was connected with the Micronesian soldiers in the company (two soldiers from Kosrae, one from Palau), oriented myself on the base, and tried to get myself situated in the tent. The ﬁrst patrol that I was to go on happened the ﬁrst night, and at around 11:00 p.m. I found myself gathering together my gear by the light of my headlamp. 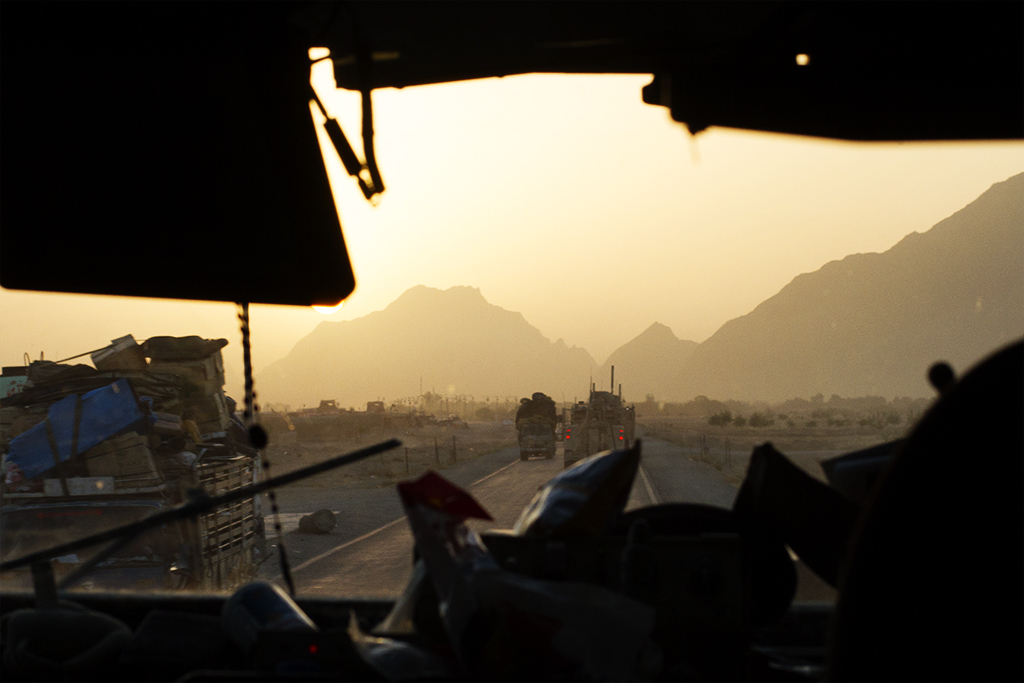 I donned my body armor and Kevlar helmet, put extra batteries into my cargo pockets, grabbed my camera, and waddled out of my tent, unused to all the weight. As the soldiers prepared the massive vehicles in which they search for Improvised Explosive Devices (IED’s), dust swirled around their boots in sifting plumes. I tried not to think too much about what all that dust would do to the delicate sensor in my camera, and instead focused on trying to capture good footage; dialogue was out of the question because of the loud roar of the motors. The soldiers ﬁnished their preparations, and we pulled out of the protection of the FOB’s T-wall defenses, and out into the night.

Out of the inky darkness the bright lights of the trucks began to pick out the details of the environment that I was to get to know over the next two weeks (at least in a visual sense). Mud houses, coils of barbed wire, parked motorbikes, and the ﬁgures of Afghan people sleeping next to the road. A few hours into the mission, the convoy located something believed to be an IED. The trucks ponderously took position, investigating the potential danger carefully. I waited for an explosion to rip the night apart, should something with the IED go amiss, clutching my camera tightly.

How would I ever be able to capture such an event on ﬁlm?

Or the intangible tension of being out on these dark roads at night?

This is the ﬁlmmaking challenge of documenting route clearance.

Ultimately, the threat proved harmless, and we continued on our mission that was to last until sunrise. As we approached FOB Pasab, morning light burnished the surrounding mountains gold. The mood of the soldiers seemed lighter once they were again within the cement walls of the base, and they began unloading the vehicles and getting ready for morning chow. So was to end my ﬁrst patrol, one down and two + weeks to go.

I also had the chance to meet with members of the Guam National Guard stationed on Camp Phoenix in Kabul before my return to New York on September 13th. Among the soldiers whom I met and interviewed were Chamorro, Palauan, Chuukese and Pohnpeian. Although the focus of Island Soldier remains upon the service of citizens from the Federated States of Micronesia, these interviews permit the opportunity to widen the scope in the third act of the ﬁlm to highlight the service of other groups from the region of Micronesia, who are also serving at high rates in the war in Afghanistan. 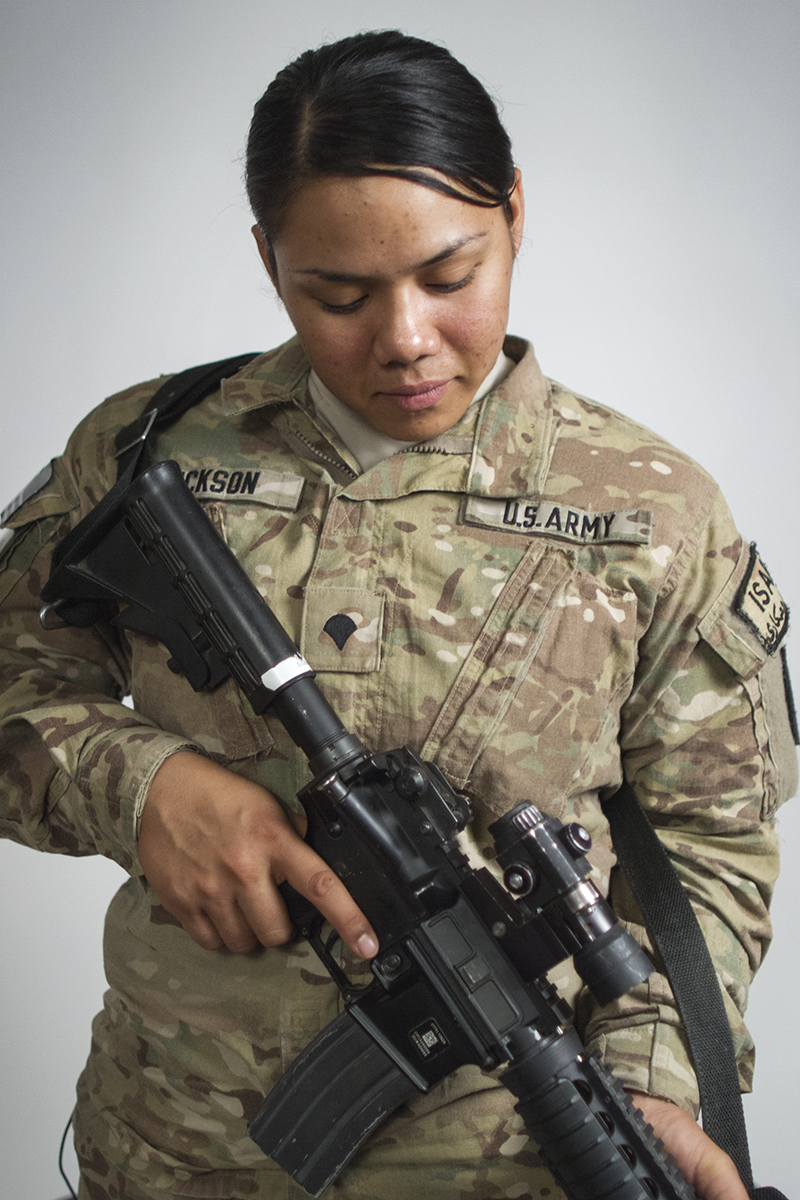 The day after returning to New York from Afghanistan on September 14th, IFP’s Independent Film week commenced, in which Island Soldier was featured in the Spotlight on Documentary section. It was a considerable change of pace to go from the dust and danger of working in Afghanistan to the upper west side of Manhattan and Lincoln Center’s polished facade. Postcards, promotion and pitching were the order of the conference, as well as an array of interesting panel discussions and talks. Over the course of the week I had the chance to meet with a number of people from the PBS world, including Kathryn Lo of PBS/Independent Lens and Cynthia Lopez of POV. IFP also proved to be a great opportunity to meet with programmers from an array of ﬁlm festivals, and other ﬁlmmakers and producers.

As we move forward with production on Island Soldier, we are beginning to cut together the footage that we have collected to date into a sample reel, including Intimate interviews and verite footage of soldiers and their families. Despite a to-do list that seems endless (grant writing, editing, shooting, book keeping, fundraising, etc.), I am reminded why I embarked on this film in the first place as I watch the footage and transcribe the interviews that I have been entrusted with. Told through individual stories, Island Soldier represents a narrative that will resonate across lines of race and class, and is uniquely rooted in the Pacific Island community. Special thanks to Pacific Islanders in Communications, the Guam Humanities Council and IFP for their support of Island Soldier.

Nathan was awarded R&D funding through PIC's Media Fund, which you can learn more about in Get Funded.

See more photos from Island Soldier and learn more about the project and the filmmaker: