The Festival of Pacific Arts is held every four years since 1972, and brings together artists and cultural practitioners from around the Pacific region for two weeks of festivity. It is recognized as a major regional cultural event, and is the largest gathering in which Pacific peoples unite to enhance their respect and appreciation of one another.

The idea of a Festival of Pacific Arts was conceived by the Conference of the South Pacific Commission (now the Secretariat of the Pacific Community, SPC) in an attempt to combat the erosion of traditional customary practices. Since 1972, delegations from 27 Pacific Island Nations and Territories have come together to share and exchange their cultures at each Pacific Arts Festival. A delegation of 2,500 performers, artists and cultural practitioners is expected, in addition to thousands of visitors from Asia and festival followers who see to it they are part of the festival every four years.  After 44 years and 10 host countries and territories, the 12th Festival of Pacific Arts celebrations is hosted in Guam in 2016. 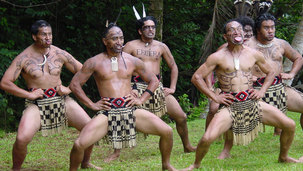 Polynesian dance speaks to the past, present, and future.